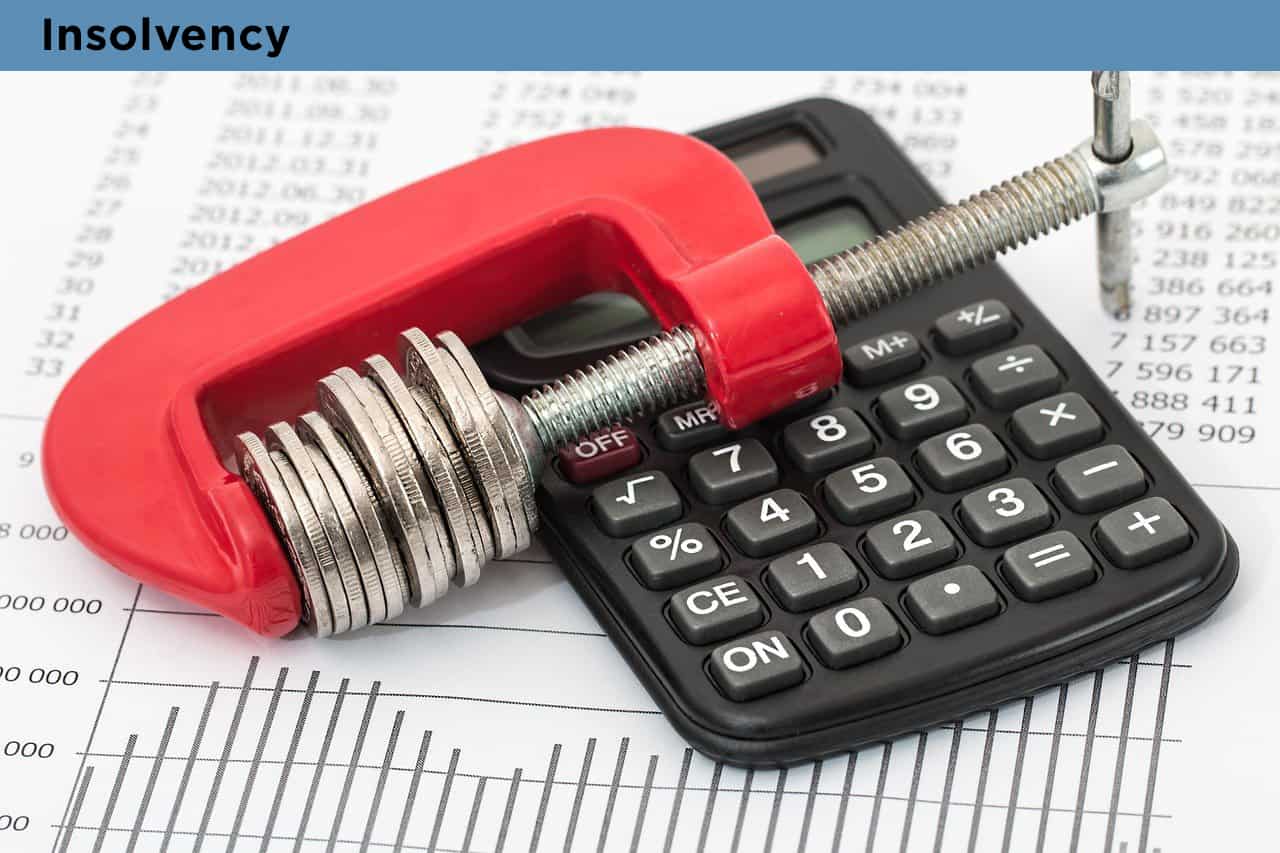 The term insolvency is one that can be used for both companies and individuals but is more generally used to describe companies. A company becomes insolvent when its debts outweigh its assets or when a company can no longer pay its bills.

There are two ways to test how solvent your company is, first to examine your balance sheet to see if your company debts outweigh its assets, and secondly, by assessing your cash flow and whether you can pay your bills on time.

If you think your business is becoming insolvent you should seek advice from a licensed insolvency practitioner. They can guide you and it doesn’t necessarily mean the end of your business if you tackle the issue head-on straight away.

There are several forms of insolvency which includes administration and liquidation, both of which an insolvency practitioner can support your company with.

Administration is a process whereby an administrator takes control of the company for a period of time in order to assess its viability and decide what the future options are. This gives the company a breathing period and protection from legal action from its creditors. The process can result in the company being restructured, sold or liquidated.

What is an insolvency practitioner?

An insolvency practitioner is someone who is licensed and authorised to act on behalf of an insolvent person or company. They will have passed insolvency examinations and have experience in doing insolvency work and they are monitored by regulators to ensure standards are met.

The insolvency practitioner’s role varies depending on the role that they are undertaking but they will provide advice and guidance to insolvent businesses. They also provide negotiation services with creditors; they will seek valuations of assets and they can assist in the disposal of those assets. They are tasked with finding the best solution for the business’ creditors and getting the most for the creditors out of the business.

What is the Insolvency Service?

The Insolvency Service is a government agency that is sponsored by the Department for Business, Energy and Industrial Strategy. They provide services to those that are in financial distress, tackling financial wrongdoing and trying to maximise returns to creditors.

They look after insolvency matters for individuals including bankruptcy and debt relief orders. They also assist in the insolvency process for businesses which includes:

They also provide impartial information on insolvency and redundancy as well as advising BEIS ministers and other departments on these subjects. They also publish an Individual Insolvency Register, a list of insolvency practitioners, and register of disqualified company directors.

What is involved in insolvency?

The service that an insolvency practitioner provides is not just about closing down businesses and liquidating assets to pay creditors, they can also offer businesses support through showing a variety of options that are available to them that could result in saving the business.

When a business is first seeing the signs of insolvency they should seek advice from an insolvency practitioner who can:

What might the outcomes be from seeking advice from an insolvency practitioner?

There are many routes that your business could take to become more solvent or resolve your insolvency which include:

How long does insolvency last?

The length of time it takes to go through the insolvency process will vary depending on the circumstances of the business and the route it takes. The typical timescales for each route are:

What are the business insolvency costs?

The cost of insolvency processes can vary depending on the process and the insolvency practitioner. They can charge a fixed fee, an hourly rate or a percentage of the amount raised. For example, administration can be charged based on a percentage fee, fixed fee or a combination of both, but this will be decided by the creditor’s committee. A Creditor’s Voluntary Liquidation is one of the most common forms of liquidation and the charge is likely to be a fixed fee of around £5,000. The fee will be negotiated before liquidation is started.

Insolvency charges are normally the responsibility of the person who starts the insolvency process, however, the insolvency practitioner costs will be taken from the business’ assets before the creditors get their dividend pay-out.

What is the difference between insolvency and bankruptcy?

The difference between insolvency and bankruptcy is that bankruptcy refers to an individual and not a company. Insolvency is a broader term that includes a range of processes such as bankruptcy, administration, voluntary arrangements and receiverships. These both cover individuals and businesses. Generally, the terms insolvency is referred to more as a business term rather than something for individuals.

How are directors impacted by insolvency?

Apart from potentially losing their job and their investment into the business, directors are not necessarily adversely impacted by the company going into insolvency. It does not prevent the director from being a director at another company now or in the future unless there was evidence of them acting improperly and a Court Order was sought to ban them from being a director. A ban of this kind can last from two to 15 years.

What are the benefits of insolvency?

What are the disadvantages of insolvency?

Putting a company into liquidation has a lot of disadvantages as it is not a position that anyone wants to be in as it’s the last thing you would want to do, but often circumstances leave no other choice. The disadvantages are:

How many insolvency practitioners are there in the UK?