You are here: Home / Guide to Business Liquidation

What does liquidation mean? 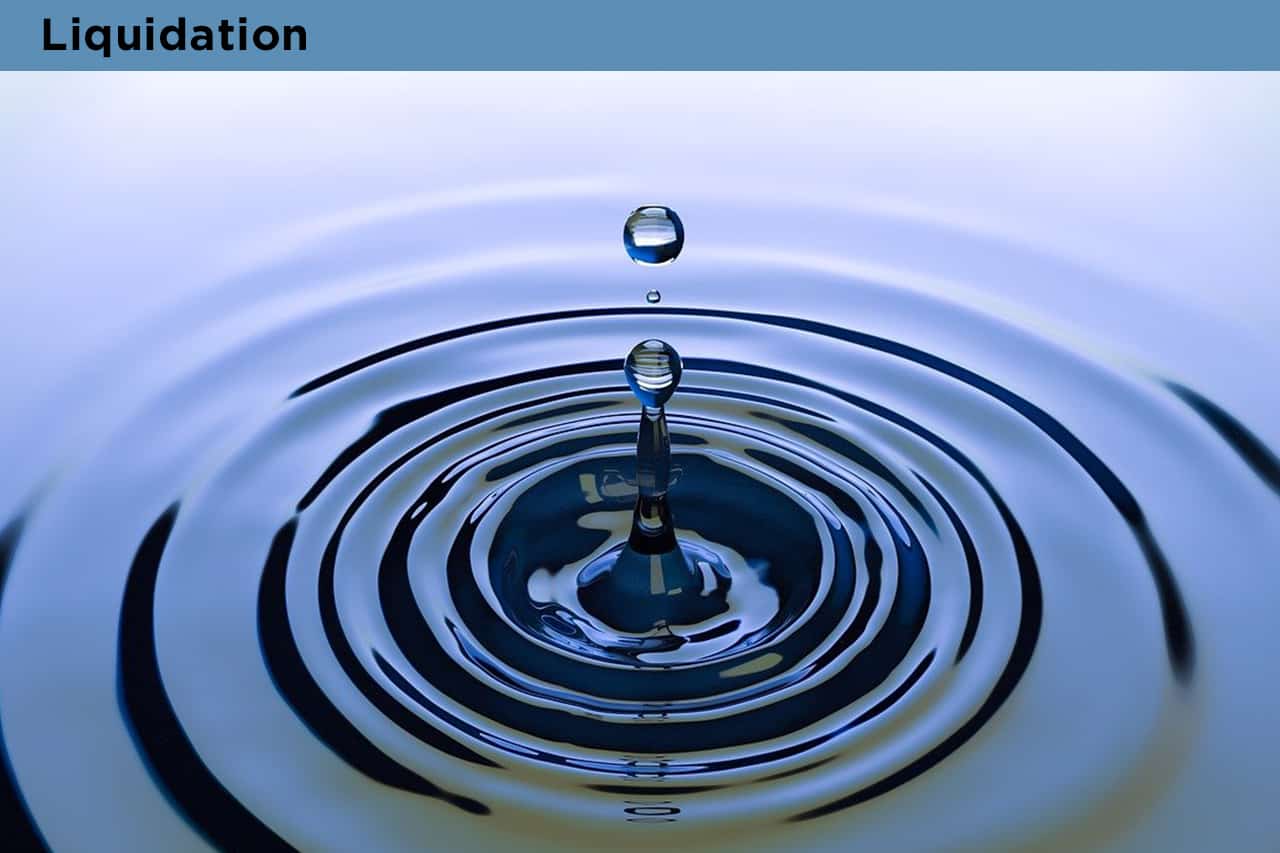 Liquidation is a type of insolvency procedure that brings a company to an end and is where all of the company’s assets are sold to pay the creditors. Once the company’s assets are sold and the creditors are paid the company will be dissolved, it will be removed from Companies House and it will no longer exist as a legal entity. If the money raised from selling the assets is insufficient to pay all the debt then the remaining debt will be written off at the point when the company is dissolved.

Liquidation should only be entered into as a last resort where possible as other options might offer better outcomes and could save the business. An insolvency practitioner should be consulted as they can assist you in weighing up the possible options available to you which could include administration, financing or selling the business.

What happens when a company goes into liquidation?

They will seek to gain as much funds as possible from the company’s assets to pay the company’s creditors. During the liquidation process, the creditors will be put first and it will be them that receive funds from the business first. The insolvency practitioner will sell off all the assets and settle the business’ debts in order of creditor type with secured creditors being paid first.

The insolvency practitioner will inform Companies House that the company has been liquidated. They will also investigate the reasons behind the insolvency to see whether any wrongdoings resulted in the company failing. If they find wrongdoings it will be documented in their report to the Insolvency Service. The Insolvency Service can apply for a Court Order to ban the directors from being a director in another company for a fixed period of time which could be from two to 15 years. This will be recorded publicly and will be searchable in their records.

Who oversees a liquidation?

Liquidation should be overseen by a professional insolvency practitioner that will either be appointed by the company or by the court in the case of compulsory insolvency where a creditor has applied for a Winding Up Petition.

What are the business liquidation costs?

On top of this, there will be costs to pay to the insolvency practitioner for completing the liquidation process on your business’ behalf. The cost of this can vary from £3,000 to £7,000 depending on your business circumstances and assets. The directors of the company are responsible for this fee being paid and if the assets can’t cover this, they are personally liable for this amount.

If you go through Members’ Voluntary Liquidation it can be an advantageous way of closing down a business if you have significant funds to release from it as it can be a tax-efficient method. Generally, this applies if you have over £25,000 to liquidate from the business, if you have less it can be more costly than the benefit gained. It is worth seeking out advice and an estimate first, but you can expect it to cost from £2,000 for a straightforward case.

What happens to employees when a company goes into liquidation?

Unfortunately, when a company goes into liquidation it ceases trading immediately and the employees are immediately dismissed. Employees can claim for any unpaid wages, accrued holidays, overtime, commission, notice pay, and redundancy pay.

Where there are sufficient funds within the company the employees will receive these payments from the company, but where there are not enough funds the payments will come from the National Insurance Fund. These claims need to be made through the Insolvency Service and more details on how to do this can be found here.

What is Creditors’ Voluntary Liquidation (CVL)?

Creditors’ Voluntary Liquidation is a voluntary liquidation process that is done in mutual agreement between the shareholders or directors to liquidate the business. This decision is normally taken when the company has become insolvent and there is little chance of turning the business around. The decision shouldn’t be taken lightly, and you should consult an insolvency practitioner that can help you to assess your options before taking irreversible steps.

However, by taking this step responsibly it can work in your favour as it will show that you acted in the interest of your creditors which will help when you are investigated to see if there were any wrongdoings. When companies wait then go into compulsory liquidation it can reflect badly on the directors.

What is compulsory liquidation?

Compulsory liquidation is where one of the creditors petitions for the business to be put into liquidation due to the level of money owe to them. In these circumstances, the creditor will have made attempts to get their money from the company unsuccessful and have exhausted other routes before applying for a Winding Up Petition. The reasons why this a last resort for most creditors is that it incurs a cost for the creditor for the petition.

The receiver will also investigate the handling of the business to see whether there have been wrongdoings that led to the insolvency of the business, which could lead to a director being banned from being a director of another company.

What is Members’ Voluntary Liquidation?

The main reason that companies use Members’ Voluntary Liquidation is because it offers a tax-efficient way of releasing funds from a business. Funds released in this way are treated in tax terms under Capital Gains Tax rules rather than Income Tax so less tax will be paid, and the recipient can also apply for entrepreneur’s relief that can reduce Capital Gains Tax to 10%.

There are costs associated with Members’ Voluntary Liquidation which mean it is only a viable option for businesses with funds over £25,000 to liquidate.

What are the benefits of business liquidation?

Although no business wants to go into administration, there are still some advantages which include:

What are the disadvantages of business liquidation?

There are unfortunately disadvantages of going into liquidation which you may expect, and these include:

What is the difference between liquidation and administration?

Liquidation is designed for companies that are no longer viable and are insolvent, and therefore have no other option other than closing and liquidating to pay their creditors.